Many of you probably remember, in our previous game – Cockwork Industries, you had to increase your reputation with each separate character to unlock sex scenes and endings. In Countess in Crimson we’re approaching this differently. Instead of character reputation scores, the player will be developing three “Personality Traits”: Empathic, Naughty and Impressionable.

Each girl will be attracted to one of those personality traits and each trait will allow you to unlock additional content with more than one girl. For example, developing the Empathic trait will improve your relationships with both Ashley and Irina.

This new system addresses many issues we had with the CI reputation-based system:

In terms of sex scenes available in your playthrough, 2 will be available for each girl without any effort, while “maxing out” personality traits will grant you access to additional, more spicy scenes.

To help you track your in-game progress, this time around we created the character progression screen: 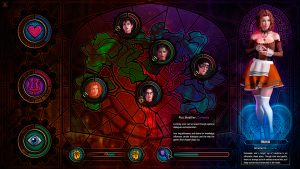 On the image, you can see Personality Trait progress on the left as well as corresponding romance progress in the center.

You probably also noticed two additional parameters can also be seen at the bottom of the screen. Since Countess in Crimson also has a more elaborate story than Cockwork Industries, the endings will no longer be determined by your romance choices. Instead, it’ll be determined by “Plot Modifiers” – Sanity and Curiosity. Depending on the combined score of these two, the game’s last chapter will play out differently and contain additional unlockable content.

Hope you found this post as least remotely interesting 🙂 . To sweeten things up, here’s an in-game screenshot of Aliyah in her full glory: 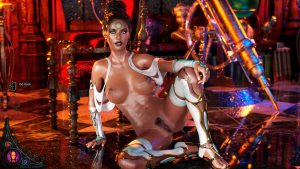