Do you remember me?

Welcome to a peaceful little French town – Latexstadt. Great Faith War with DICK (Deranged Islamic Cumdrinking Killers) is over and its horrors like extermilkation camps for futas are far gone. Victory of the allied forces of the Axis consisting of The German Reich (under the rule of Führerin Adolfa Genitalbrecher), Neo-Vatican (under the rule of Her Holiness, Pope Joan de Bruisemark) and Great Empire of Japan (ruled by Empress Itami Bondēji) guarantees a relative peace. Peace still sometimes threatened by DICK sleeper agents. Due to this threat streets of Latexstadt are patrolled by elite BDSM (Bund Deutscher Sadomasochistischen Mädel) soldiers, ensuring that regular townsfolk are not bothered in their daily sleaziness.

On a high hill towering over Latexstad an old mansion stands. Townsfolk rarely see the three noble sisters living there, thus both the mansion and its residents are surrounded by a thick aura of rumors and incredible stories. Some of those stories make blood run cold…

It was rather hard not to notice the lack of updates in recent months. From a customer’s perspective it probably looks like we’re currently spending your hard earned buck living in fancy penthouses, banging sexy gals and cute Thai TS and not giving a damn about you anymore.

In your emails, three keywords pop more often than others – futa, boobs and… games. The problem is – we don’t make games. While both of us pack a respectable portfolio of eroge projects we helped create for other companies (mostly Lesson of Passion games), when it comes to developing our own games we kept hitting the “neither of us is a programmer” wall. Due to that simple fact SS, ToP and WoP games were out of question.

Have you noticed the “were”?

Yes, Ladies and Gents, it’s my ultimate pleasure to announce that Mansion of Evil Pleasures aka Sodom Sluts the Game and a yet unnamed Tales of Pleasure game (Astaroth will brief you about this one when he’s ready) are in development and expected to launch next year. We laid low until we were 100% positive that we’d be able to develop a game on our own (we’re a micro company* – dealing in extreme niches, so hiring a dedicated programmer it absolutely out of question right now). Fortunately, thanks to commercial game engines that require small to none programming skills, it turned out that – hell yes, we can.

*meaning we’re self employed, sitting in one depressing dark flat and keeping each other company

Dev in the details

1/ At this moment – we decided on a classic point and click adventure game/visual novel, viewed from the eyes of a protagonist. This is a kind of game I’m sure I can pull of. Yet, I’m still testing a dating sim option (time management, pursuing different girls and so on). If I grab a hold of it, we’ll make a switch from Visual Novel to Dating Sim (adventure elements remain as they were intended, extra dating sim stuff added). I’ll keep you informed if such a transition is possible or not. Expect a definitive answer before the end of the year.

3/ Story follows a year in life of a stunning futa-gal (she has a cock, an itchy pussy and a tight asshole), No. 69, nicknamed “Cumdump” (nickname changes as No.69 gains/loses respect among denizens of the mansion and townsfolk). Yes, she had a “real name”, but that was before she was purchased by the three sisters from a mysterious manor. As time flies and seasons change, reclaiming her real name and pursuing some kind of a relatively “happy” resolution to her story is entirely up to the player.

4/ While dating sims and visual novels are undoubtedly the most popular genres and their popularity doesn’t seem to be fading, their presentation is mostly… well, soooo MS-DOS-y. Static images, occasional eye blinking or pose change… I don’t want that. All “talkable” characters will have different animated loops for various moods. I cannot, however, promise you everything (namely – general NPCs/background elements) will be animated. Considering a workforce at my disposal (an army of me) that would be a huge overkill, making a task of finishing a game within a relatively short time impossible. But I can promise you I will do my best to make it as unnoticeable as possible.

5/ Sex should be stunning. A single, static frame after an hour-long pursuit of a love interest is not a satisfactory reward. So yeah – for main sex scenes we’re going fully controllable (if you choose so, as there will be an option for hands free controls, that “grant” you passing a sex-scene but with mediocre “final” result) FMV.

7/ While finishing the game will be a relatively easy task, discovering all of Latexstadt citizens’ secrets and hidden quests isn’t going to be easy and will keep you occupied. Since fashion sense in Latexstad is rather daring it should be, however, a rather pleasing task.

8/ Game will be available in members area as a downloadable file (both windows .exe and Android .apk). After testing an interface – while it will definitely be playable on smartphones, it will be far from optimal due to small interface elements. The creation of two separate interfaces is out of question, so let’s say that targeted platforms are PCs and Andoid Tablets (7″+).

As for the story… Well, I’m doing my best to ensure that just a little thought about playing the game will be a threat to your immortal soul, while actually playing it will guarantee a cozy, warm place in hell. 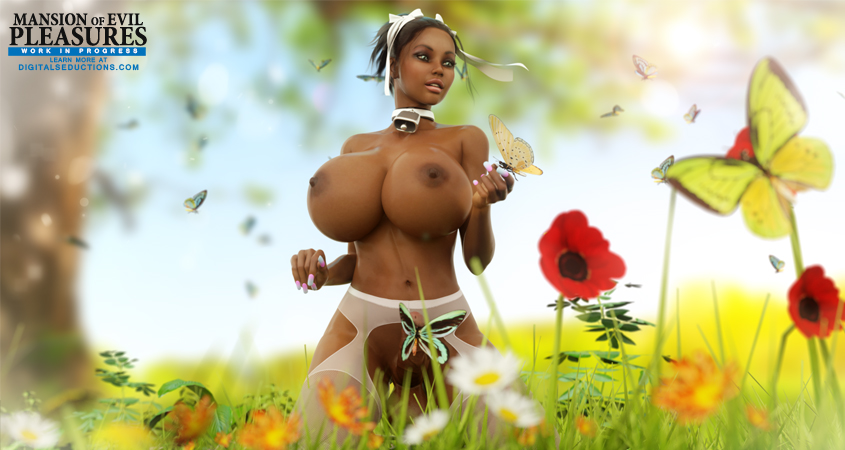 Accessible only in Spring Butterfly Meadow, provides both the opportunity to jizz-out and to make new, rather unusual acquaintances.

For the time period required to finish the game, I’m adopting a “Patreon” kinda approach to members area updates. While general progress and lots of promo images will be available to everyone here, on our blog, some of the stuff stays exclusive to our members. Developing a game as one-person dev team is a 12-hour a day, six days a week work, so it’s kind of obvious, that “other” (non MoEP related) content will be sparse. I think I should be able to pull a comic or imageset quarterly. This year is an exception. Virgin Hunters, a comic announced a while ago is waiting for its last page and if nothing bad happens should go live by the end of next week. I’ll try my best to add one more comic around Christmas (Yeah, Candi is finally going to have some fun. Sorry it took so long). From New Year onward we’re going with small, but regular MoEP members exclusive updates and big/self contained things (comics/image-sets) added quarterly.

If this model won’t work and SS members start to vanish, focus will be shifted from game development to picture sets/comics till balance is restored. The actual use of Patreon for funding a game, while tempting, is out of question, as it would be a middle finger to our commercial members who have been supporting us so far.

Development of a game is a perfect opportunity for us to reinvigorate the blog and get to know more about your expectations regarding Digital Seductions as a whole. I want you to be involved in the creative process. While basic elements are laid over and for obvious reasons must stay unchanged, you can influence many of the elements featured in the game. In the next gamedev journal I’m going to publish a poll in which all our blog readers will have a chance to influence one of the game elements. Remember your feedback is extremely valuable, so don’t by shy and drop a line in comments or send us an email.

So, till next time.

Mansion of Evil Pleasures aka Sodom Sluts: The Torture Game 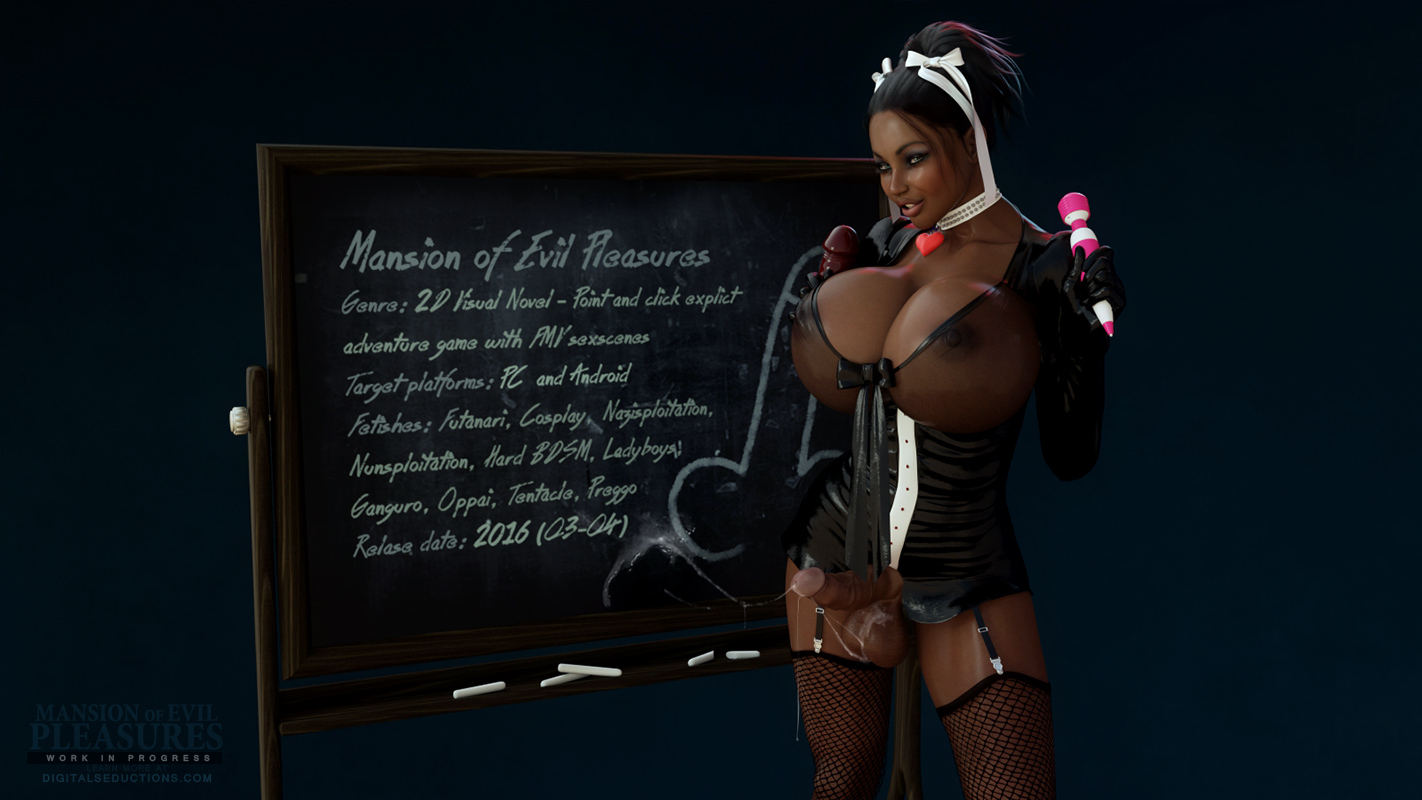 This journal entry relates to a game that is currently in production. At the moment of this publication, members area of Digital Seductions offers only 3DX picture sets, pinups and comics.